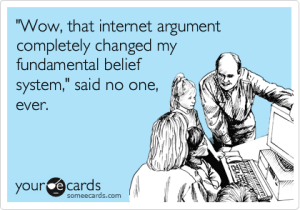 This past week I read, and participated in, discussions amongst friends, family, and acquaintances that ranged from civil, to testy, to heated. I was reminded with emphasis how poorly text based social media are suited for accurate and intelligent communication.

For thousands of years, the vast majority of human communication was face to face, where tone, facial expression, and context are much more easily understood. Only in the last 100 years with the telephone (which removed facial context), and just very recently via digital media (which further removed audio context) have many of these interactions transitioned solely to text on apps like Facebook and Twitter.

As I was thinking about this problem, I was listening to The James Altucher Show Podcast (Episode 192 with Stephen Dubner). At 33:30, Stephen Dubner says, “Written communication is very two-dimensional and you’re missing all the inflection, you’re missing humor, people make mistakes in writing and in reading, and I find that a lot of problems I’m constantly encountering, like people failing to follow through, or to do stuff, or to get the idea, are the result of literally poor communication.”

Not to mention the ease with which one can type an update free from proofreading, nuance, or fact-checking combined with digital permanence denies people the chance to say, “I didn’t mean it like that, let me clarify” as they might in a conversation.

What makes matters worse is the virtual echo chambers we find ourselves in, whether chosen by us or for us. On Twitter, as you chose to follow like-minded accounts, you surround yourself with similar opinions. On Facebook, their algorithm increasingly encircles you by news and information and discussions that resonate with your pre-established thoughts. Their goal as a profit-maximizing business is to leave their users with a positive experience, and if that means divergence of opinions are squashed, then so be it.

To further exacerbate the problem, the sensationalized news promotes/derides the vocal minority on the fringes of any group that wants to get publicity, and that viewpoint or inflexibility is ascribed to the entire group.

Now, what does this have to do with business? I run into the same misunderstandings and miscommunications with email as with social media. The rules are the same no matter which media you are communicating with:

Personally, my rule of thumb is “Never type anything I wouldn’t want to show my grandmother.”